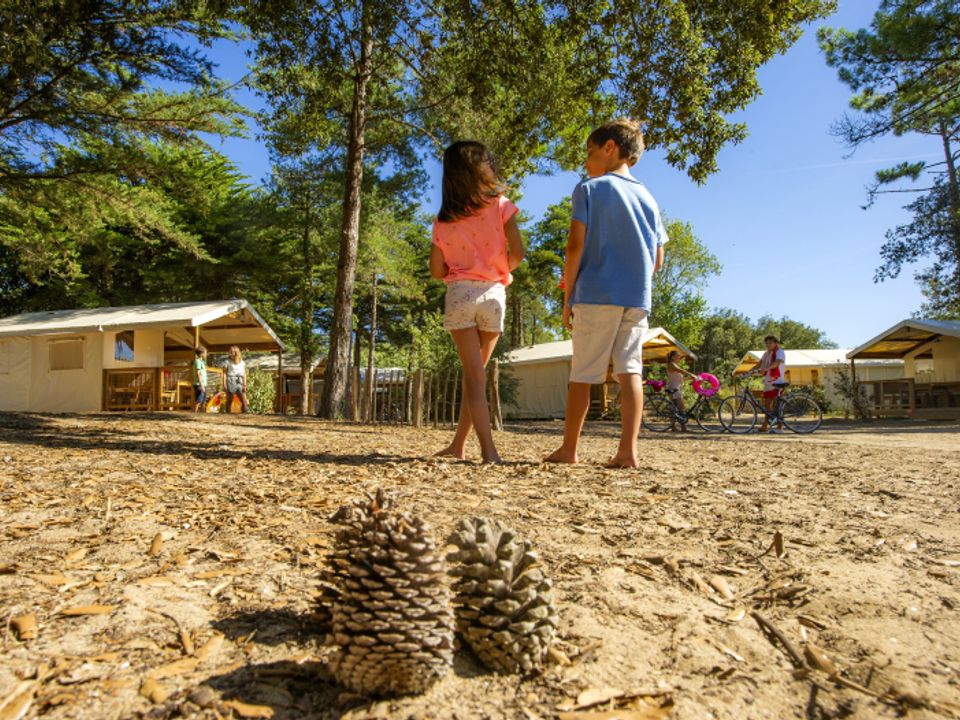 Nice French campsite; we stayed in a safari style tent - tente equipe - which had everything we needed including a coffee machine (the dark brown pitches in the photo)
There was nowhere to hang clothes so we were living out of (overpacked) suitcases.
We were on plot 46 - next to the road and next to... a staff tent which was rather noisy on some nights which caused an issue but security calmed the situation.
I would advise to avoid plot 46!
Only gas BBQs are permitted which I think is the norm - there are a limited number so if you fancy a BBQ you need to book it for 5 euros per day.
There is an ok supply of croissants and bread in the morning but an amazing boulangerie in the middle of the village - well worth the 5 minute cycle in the morning.
Wash blocks were cleaned daily and were of good standard but someone seemed to have stolen all of the loo seats (!!)... and toilet roll seemed a bit short at the wrong time of day.
Entertainment was good and the campsite is great for kids to ride bicycles around.

Great location to get to the lighthouse (for ice creams) and Plage de Conche in the daytime - 20 minute bike ride across the salt flats. the bike tracks are amazing and everyone respects the cyclists which is sooooo refreshing - lots of 'no entry' signs for cars but bikes are allowed!

I almost didn't write this review as this is such a cool camp site!
Ile de Re is just off the coast of France by La Rochelle, you reach it by driving over a long an toll bridge. The island boasts it's very own "micro climate". When we arrived, it had been raining solidly for two hours drive, on reaching... the bridge, we drove through the rain and mist wondering how our holiday would be!.. As we progressed over the bridge we descended onto the island and into clear blue skies and warm sunshine.. what a great welcome!
The campsite is located further up the island in a wooded area just in from the dunes by the sea and in fact there are several paths over the dunes to the beach. The beach itself is not one of the best on the island but considering there are some lovely beaches near by, that's really not an issue! We were on a pitch very close to the sea and hearing the waves, enjoying the sea breeze and enjoying having it right there was great. The pitches vary in size, shade and some offer electricity and water too.You can also rent one of their "Glaming" style pre set up tents if you prefer. There are facilities for washing up, plus toilets and showers which are all well presented and constantly kept clean. There is a cafe on site and bicycle hire. plus a playground and various other facilities. We found the staff were friendly and very helpful. We also found fellow campers to be friendly, unobtrusive, polite and not noisy. There was a clear attempt not to disturb others and in general the whole site is eco friendly too with decent recycle facilities. We spent a week here and it was a really good experience. The facility was not expensive, the whole campsite a pleasure to be on and no irritating noisy or thoughtless campers. There is plenty to do on Ile de Re, with great beaches, the extensive cycle paths local salt making and pretty little towns like St Martin and others. Visit the lighthouse for a wonderful sunset too! IsIe de Re is a little expensive, but there are several good supermarkets, a cheap petrol station close to St Martin and it's a beautiful place to go!

I stayed at this site in May 2013 and wish I had never made a booking. Compared to other places I have stayed on Isle de Re in the many years I have been coming to this delightful island this site is the worse I have ever stayed at. Although the actual accommodation was fine; I stayed in a Mongolian... Tent the site was generally run down with many old caravans that were in a state of disrepair.

The inventory wasn't checked on my arrival and when I went to cook a meal I found dirty, filthy plates that were both chipped and cracked. Further inspection showed that many of the cups and bowels were also cracked. I returned all of these to reception and was told they didn't have any spare bowels so I had to use my own! I also paid 10 Euros for an internet connection that didn't work for the majority of my stay.

I sent an email to Head Office on my return to the UK and was advised to send my complaint by recorded delivery letter which I did. Unfortunately I didn't receive a reply so I sent a further email which thanked me for my comments.

All in all a very a very negative experience and a site I would not recommend to anyone.