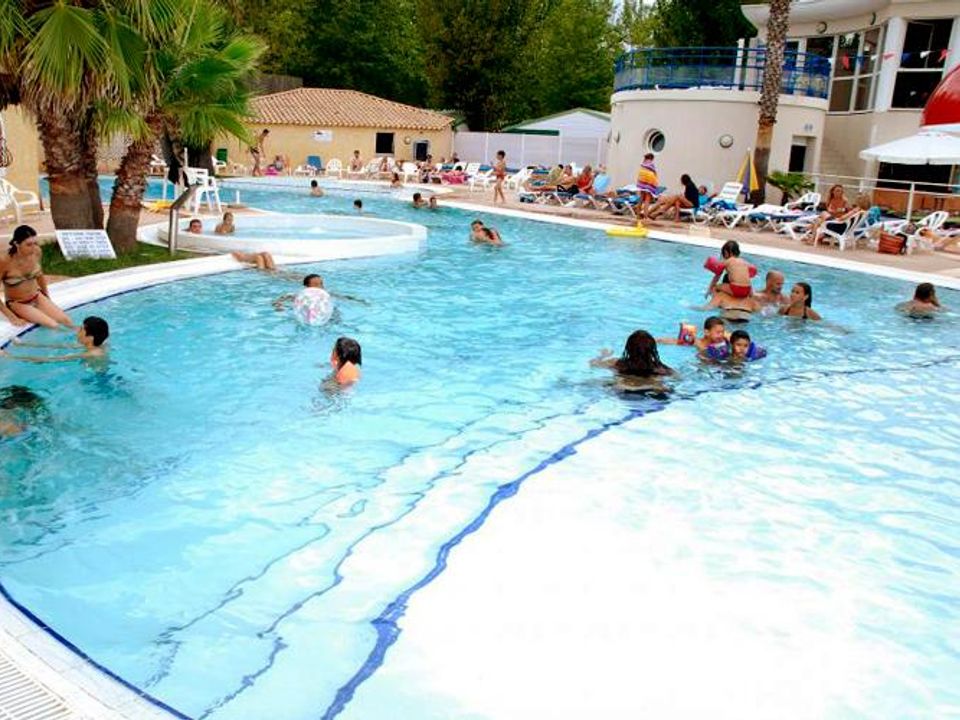 Arriving is a bit like driving into Blackpool. Restaurants and tat shops with quite a tight entrance if you have a big rig. Told to check for a pitch but found only electric pitches despite booking full service. After much debate I was offered a full service pitch at the back of the place (where all... the service pitches are apparently) and it was fine, great water and drain connection. Level pitches, but dusty, and at this time of year only one toilet block open. Then came 'Le long weekend', twice in May, and suddenly it's packed and very noisy with loads of kids running around. The beach is an easy walk and lots of restaurants are open, even the pizza on site isn't bad although the large box makes you think it's a lot bigger than it is. One thing on the pitch to watch for after rain- loads of snails! At least 30 on our pitch alone! Reception was excellent too. My wife needed a dentist and the receptionist spent over an hour phoning around to find someone who would take us, very much appreciated. We stayed two weeks although one would have been enough. A very friendly, well run site.

We came a saturday afternoon and we went after the check in to our pitch. We had asked for a big pitch and got and great pitch. No a lot of shade but it was big.

This... one is the one, they had events each day and night. In the pool, outside the pool and and the beach. As sour son on 21 said, there are almost too many events.

The camp site has quiet time from 24-07. That was kept well. Of course some nights some young people had a party and we're making a little bit of noise, but it didn't bother us.

They are only getting 4 stars out of five because....
1. The ladies toilet was on the other side of the building. You had to walk pass the bottle and paper container, but there was no light there during night. They had this motions censor bothe at the men and women bathrooms, but no one the way to the bathroom. Please get one up.

2. Each event was in French. When they drove around to announce what was going to happen the same evening they only talked about it in French. I know we are in France, but our french isn't that good. with all the people from NL, UK, D, DK etc, please do it in English too.

We can strongly recommend this camp site. If you want one with no activities and quite time from 22" this in NOT the one.

Very clean and great camp site and we will be back.

Mehr dazu
EastyorksTasha
East yorks
In the thick of things

We stayed at this site for 2 weeks in our touring caravan during May this year. Upon arrival we were asked to pay in Advance ( the only place to ask this out of 22 week tour) but they were unwilling to accept debit cards and wanted a whopping 50 euro deposit for the gate fob . . The pitches for tents... caravans and motor homes were adequate in size but the access was very tight and restricted by very narrow access roads with very acute angles and also by trees , some trees had been cut down but stumps left on pitches some 4 to 6" out of the ground. The toilets and showers closest to our pitch were closed when we arrived, the only block open was at the reception a good walk away although the ones close by did open during our stay , after persistent badgering from several guests. The toilets and showere were clean and water was hot , but only one small sink for hand washing with no soap or dryer. Pool area looked lovely well cared for lots of sun beds , but we were there in low season and I can imagine it gets crowded looking at the size of the site. The takeaway / snack bar was nice prices were ok here too. The entertainment had not started for the season so I do not feel qualified to comment on this ....This site is in a great location if you like to be surrounded by choice !! Set along the main "strip " of the resort , There's lots of bars takeaways restaurants and shops from the second you leave the site , the lovely beach is only a short walk and is ideal for children as it does not shelve steeply when entering the sea. The village of vias is only a hop away and this has a lovely little squre Edged by eateries ( where we ate some of the nicest food of our holiday) . Vias also has a good market once a week . Once pitched we enjoyed our stay here and would return for the location if not particularly the site. Again I stress we were low season .

OK, so maybe this was our fault, but we have a fairly big (not massive) motorhome, which is 8.5m long. We arrived at the site without a booking as it was off-season. Paid (cash in advance) for two nights. Then the problems started. The pitches on the site, despite being advertised as 80-100m2 per... pitch, are so close to each other they are nearly impossible to manoeuvre around, especially with the location of trees (great for shade in summer, but not to get in or out of pitches). Fortunately as we were off-season, so the site was not busy, but I would imagine in high season with a busy site moving (even to empty waste water) would be nearly impossible with a larger van. This alone would put me off returning.

The next issue was the pool. Despite being off-season, there was not a spare chair anywhere and the place was mobbed! From other sites we have visited the size of pool is just too small for the number of people on site. Further the kids pool was actually too deep for our toddler to play safely in without being closely supervised. He is nearly 3, so this would really be an issue for families with very small children.

Next, the "play area" was nearly non-existant. One slide, again suitable for slightly older children, but not big enough to cope with a site of this size.

For older kids, there was a ball area (football/basketball) about the size of a tennis court. This was ok, and also quite busy.

As we were "out-of-season" (Mid May) kids club was closed. We didn't use the bar/restaurant or view the entertainment, so could not comment on those aspects.

Toilets were clean, but without seats (our experience would suggest this is no longer the norm for better run and managed sites)

Finally, I would say the place is getting very tired, a little run down, and very traditional in that you are on-top of your neighbours. So the place is not for us. For a four-star venue, this seems rather optimistic, and I would not say the site warranted the four star rating.

We won't hurry back, especially as we found a much nicer site right across the road with direct beach access and far better (cleaner, better facilities and more spacious) site directly across the road!

Stayed at napoleon for 2 weeks July/Aug 2014, in a tent with our family of 3 teenage girls. The site had its good points and bad.
The bad first, noise, the entertainment goes on till 12. And the entertainment ranged from bizarre to crazy. Your only aloud in the pool with budgie smugglers on. The bar... and restaurant staff are amateurs, we got what they wanted to give us, when they wanted to give it us (in their own french time) and were charged various amounts over and under the list price.
The okay, the pitch was sandy, with little shade. The toilets and showers were as expected, but clean. Our fellow campers were well behaved which was surprising for the amount of teenagers, the boys love to check their reflection in your car mirrors.
The good, the spar shop was a super little set up of everything you need for camping in france. Well priced, with deli, boulangerie and cafe. We didn't need to go to a big supermarket. The location is great for a beach holiday. 100 meters on the flat to a nice sandy beach. And its in the middle of the strip with bars and restaurants plentiful.
All in all, an average site with a big price, catering very much for the french.