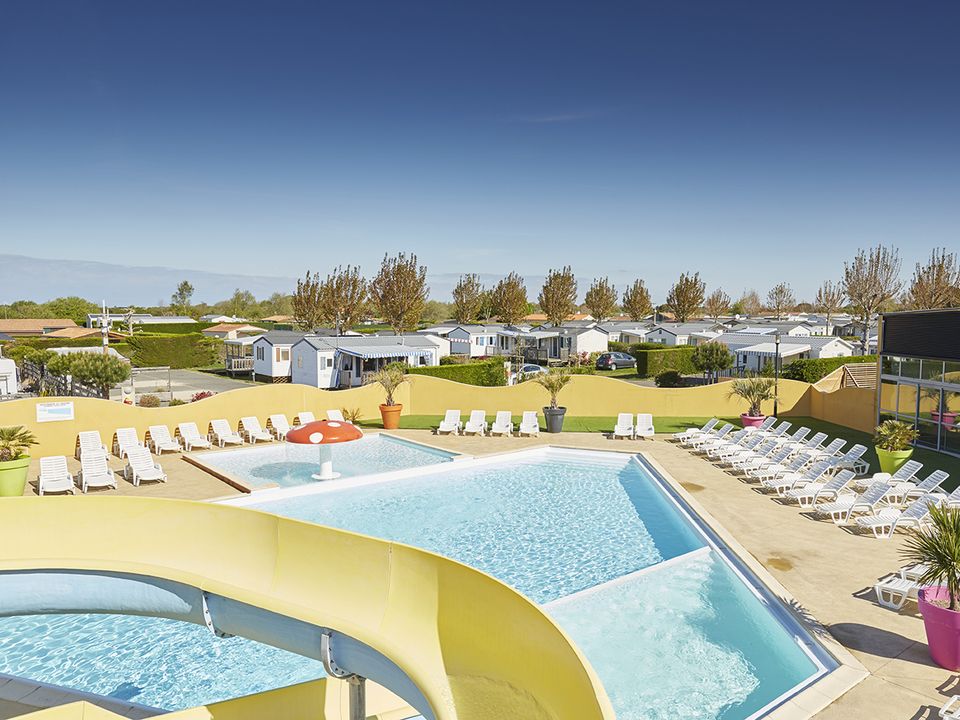 we camped for one night on a cycling trip. We thought we had a quiet pitch but the booking was messed up and we ended up right next to the main complex. A noisy night with unsupervised kids running and cycling all around our pitch.
We ate on site and that was expensive for what it was. The small on site... shop was useless for our needs with only very basic supplies.
Car lights disturbed us from people driving into the site and road lighting on the site was intrusive.

Well, where do I even start. The reception staff, especially Estelle was rude and curt and unwilling to help in anyway. Our touring pitches were 20m from the central area which was an absolute nightmare. Music on until 1/2 am EVERY NIGHT. Gangs of youths screaming, running around, banging on caravans,... fighting in toilets the list goes on and on. We complained daily for the first week, asked to be moved but were refused. After losing my temper we were told we could have a partial refund so we searched for a site to transfer to in the area but every where was fully booked so we had to stay. My toddler was terrified and didn't sleep for the duration of the holiday, we had also come away with our mum and dad who are in their 60s who were also intimidated and unwilling to venture out which caused us immense stress and totally ruined our holiday. I honestly can't stress enough that if you are English DO NOT GO HERE, the staff hate us!!!! The four worst pitches were the ones that the English were put on and it was a case of Iike it or lump it. There were bouncers on the entrance and it seemed like ppl from other campsites came in at night also. Think club 18-30s and you will have an accurate image of this hell hole. I got injured walking into the toilet one night at around 11pm as a gang of youths came bursting out fighting, badly injuring my ankle and ending up on crutches for the last 5 days of the holiday. The pitches are small and cramped and to be honest the four pitches the English were on should not even be pitches. I basically cried with frustration and tiredness for the whole 2 weeks and would never ever in a million years set foot on this site again. We even discussed selling our caravan it has ruined it that much for us. It may seem that o am being dramatic but I have not included the half of it. Yes the site has spent air of money doing it up and the bar/pool is beautiful but the environment and clientele of ppl staying here is questionable for a supposed family run site.

We have been coming to this site over many years on and off. It's grown busier and added lots more attractions during that time. But it's always been friendly and helpful. Most staff speak some English, or are tolerant of my hybrid attempts at French. Had a great week here. You can join in everything... or nothing or anything inbetween. The Emotion Chalet we stayed in was clean and had everything we needed. Big enough for 6 of us to be very comfy. Although if you want to spread butter on your croissant you might want to bring a spreading knife as the steak knives provided meant we had to use a spoon for spreading. The public toilet blocks were always clean even after a high season foam party. All in all we had a really good stay.

We had only planned to stay one night - thank heavens. The worst site of 12 sites in France we stayed at in a three week tour towards the south and back in June 2017. A modern site, but we were directed to a stones-only pitch for our motorhome with no shade (it was already quite hot at about 30C in... mid-June this far south near Bordeaux). And the swimming pool was CLOSED !! (opens later in June). Primitive third-world shower block - you name it, it didn't have it! (and some of what it did have you wouldn't really want lol).