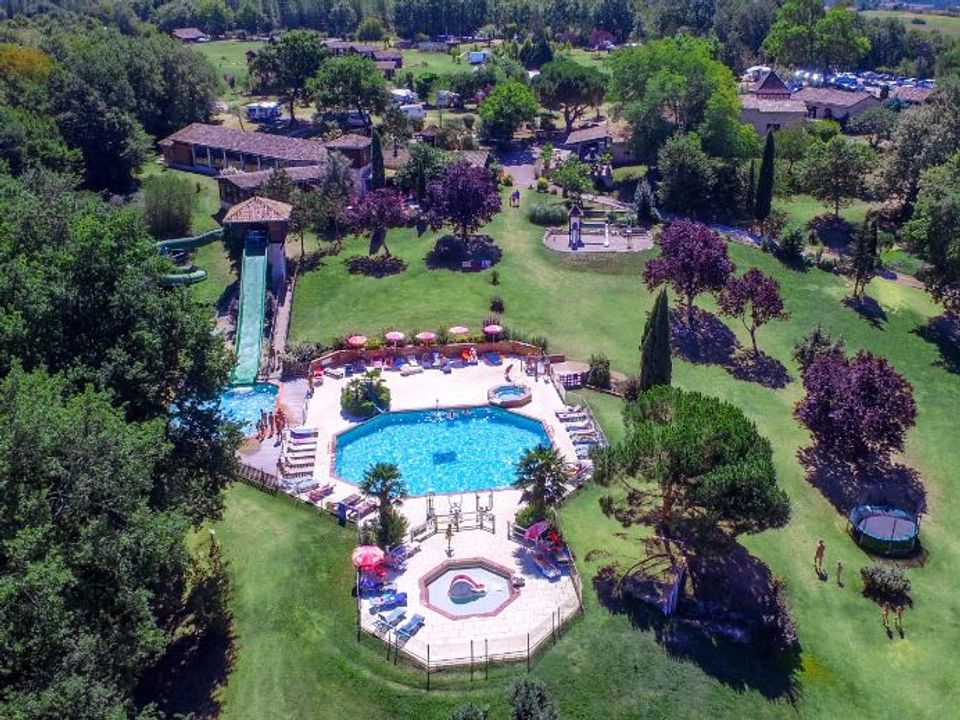 This is a beautiful site set in mature undulating grounds that are stunning. The trees and plants are magnificent. Facilities are exceptionally clean. It was sad that because of the virus it was so quiet. The owner could not have been more pleasant and I wish them well.

We spent a week at Laborde at the end of June staying in the Mobilehome agréable. It's the usual static mobile home with 2 bedrooms, a sitting/dining area, shower room, separate loo and a terrace. There is also a picnic table ouside on the grass. There were two of us and so we have lots of space.... We liked the wooden sun loungers provided. However, it soon got rather uncomfortable. So next time we will bring some kind of matress.

The kitchen was quite well equipped but lacked two items commonly found in campsites - a salad spinner and ice cube tray. I could cope without a spinner, but we struggled without ice cubes when the daytime temperatures stayed above 30 for the whole week.

We received a very warm welcome by the new French owner. We arrived much later than expected, no traffic holdups, just narrow roads and towns/villages with 30 kmph, NOT 30 mph, speed limits. Something to bear in mind, as Laborde is in a very rural setting and you cannot go anywhere very fast until you hit the motorway. The owner, François, took time to check us in and explained all we needed to know.

There is a real sense of space at the site with a lot of greenery. We certainly felt we were in a natural environment. The chalets, etc weren't too close to each other.

There are four pools, three outdoors (one for kiddies) and one indoors. There is a pool for the waterslides. The outdoor pool was probably the smallest pool at a campsite we have come across. There weren't many parasoles, either. We were there when there was a heatwave and you simply couldn't sit by the pool without some kind of shade. As a result, we didn't. We used the indoor pool instead and laid out in the solarium. The presence of the waterslides was the main draw for us; we would have booked another campsite, if it weren't for them. So it came as a major disappointment when we were told that it wouldn't be in use until the week after, the start of the high season. I looked longingly at the chutes and empty pool imagining how much fun it would be to slide into the water. Hey ho. It was not to be.

We ate once in the restaurant and we enjoyed our dinner there. The cooking wasn't top notch but was perfectly adequate. The pizzas looked good, as well. They also do snack, mainly catered to the Dutch taste - frikandel, loempia, etc. Yummy! The terrace is the main socialising area. There aren't that many tables and chairs, so I don't know how it will be when the site is full.

If you, like me, enjoy a naked wander in the woods, then you will feel short-changed here. The woodland paths are really rather short; 5 minutes and you are done. May be the new owners will clear more paths in future. There are two fresh water ponds. When I was there, I didn't like the look of them - grey is not attractive! I'm sure it is perfectly safe, as the water is fed by the stream, although I noticed there were lots of mosquitos there. I: am very, very, attractive to mosquitos!

The small grocery store is good for certain things but not others. I was amazed by how many local wines they stocked and at the same time lamented on how little fresh fruit and veg was available. They take orders for bread and patisserie. You write down your orders by 7 pm the previous night and collection is ready from 8:30 in the morning. The quality of the baguette is very good.

The main area of inconvenience was the lack of wifi throughout the site and roaming signals were a bit patchy. You can access the free wifi free in the bar/terrace area. But it was a faff having to walk there eferytime you needed the internet. There were notices up saying that we were in rural France and many areas weren't on the grid at all. The availability is also subject to weather conditions, meaning that if wind blew down the phone poles, nobody will have a signal, the owners included. I appreciate all that about being in the country side, but another campsite not a million miles away managed to have it available all over, subject to paying for it, so I don't know why they hadn't come up with a solution. A mobile detox might be desirable, if you don't pkan to leave the site for the whole week, and miss out on all the wonderful places to visit. We didn't want the wifi merely for social media purposes, we wanted it to check the weather, to plan routes, or to look things up on the internet (I didn't bring a single dictionary or guide book as I thought I would have access to the net), it's 2019 afterall. In the end , we noted down everything we needed to look up and did all the searches in one go. But there are also notices asking campers not to use the wifi for more than 15 minutes at a time. We were the only one grumbling... Hopefully the new owners recognises the issues and will do something about it.

All the mobilehome agréable are situated on the same west-facing field. So if we wanted a change of vista but staying in the same grade of accommodation, it won't be possible.

We were there the last week of the low season and the place was nice and quite. Perhaps a bit too quite - the activity board was practically empty. It would have been nice to have some entertainment laid on. I'm sure there would be enough people around to make it worthwhile.

We did enjoy the stay at Laborde and we had a relaxing time but it wasn't quite as fun as anticipated. May be it was too tranquil for the end of June. But that's not to say we wouldn't go back. In fact, now that we know what it's like, we will porbably go back next year.

We stayed in a large well equipped chalet. The site is spotlessly clean and the new owner helpful. We had a minor problem with the shower which was resolved quickly. The restaurant has a small but tasty menu. There is an indoor and two outdoor pools. The flume was out of action I think due to a problem... which I think was about to be fixed as we saw the owner in conversation with what were clearly contractors.

The shop has a limited range of goods. There are boules and tennis courts and small lakes for fishing or swimming.

Its true the site is some distance from nearby towns but his is rural France and the local villages have a great charm. It might be a problem for motorhome visitors.

The owner is clearly a naturist himself and he told me he looks forward to greater mix of nationalities.

We will certainly consider returning.

We have stayed here three times this year. The first time with the previous Dutch owner, the second and third time under the care of Francois, the new French owner. A friendly bar with good food, the indoor heated pool and sunbathing area were excellent. A quiet, secluded campsite within easy drive of... nearby markets and villages. We will continue to book future visits here as we had a calm and tranquil holiday there. Thanks to all the wonderful staff and host.

We have previously stayed here with a caravan using ACSI and had a pleasant time. However, this time we stayed in a Sympathique cabin. If you like pine, pine and pine this is for you but it was too overpowering for my wife & I. In addition the cabin was not very clean & the drain smelt.
Fortunately we... stayed out of the cabin, apart from going to be and enjoyed the sun. The outdoor pool is small and why they do't open the indoor pool, which has sliding windows all the time I will never know.
I would not recommend the cabins, but as a quiet peaceful camp site with a caravan or camper van a weeks stay is sufficient.