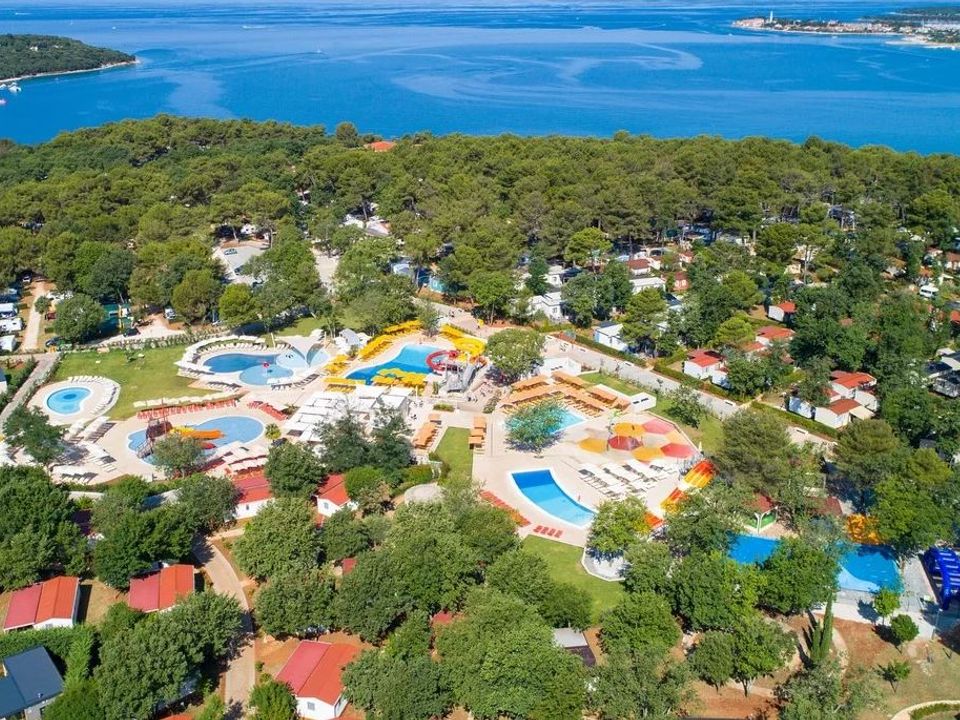 Fine place for a short holiday. We was there for a long May weekend. It was beginning of the season, but apartments was prepared well. There was not so many people but I think on the top of the season will be full of people so might be noisy. Apartments are 30 meters from the sea, so it make a wonderfull... view. Beach are rocky but verry clean.
Rooms are full furnitured, bed verry comfortable and big. Towels and toilet papper are on the bathrooms. Kitchen with all things needed to prepare meals. Only you have to take kitchen cloth, dishwashing liquid and sponge. Every tree day staff change towels, and garbage bags.
Good place to spend holiday with family. Everyone could find something for himself. It is not a hotel but a complex of building with apartmens. Around a lot of green. Sports area also have the place.

We have been using Lanterna apartments every year for the past 15 years, but only during 1. May holidays and we will use them again and again.
In period 1. May holidays and for this money (apartment for 6 persons for 5 nights for 250 evro) accommodation in these apartments is acceptable - in summer (high... season) the price gets catastrophically high for what they offer (old apartments, urgently needed renovations, without air condition, etc.). The eternal problem of Lanterna (which make me angry every year) is the check-in procedure, which is catastrophicly slow - I have never seen as slow staff in the reception as in Lanterna. Check-in procedure for 4 people on average lasts between 20 and 30 minutes !!! Warning for all potencial guest during 1. May holidays - in this time in Lanterna is organised "Spring brake party", so if you want quite and peace on your holidays don't go to Lanterna. Everybody who has been in Lanterna in this period knows what am I talking about.

En savoir plus
Trisha L
Crieff
Not as I expected

I had no idea that these apartments formed part of a huge complex, remote from anywhere and therefore isolated from choices for buying provisions and sightseeing. We had to hire a car just in order to be able to get out and about, and it became very important to do so when we saw the prices being charged... in the onsite supermarket and stalls - Very expensive!. The rental did not seem reasonable, given the lack of amenities within the apartments - there was no draining board next to either of the sinks, poor utensils (no spatula, coffee pot, toaster etc). A fan would have been useful too. Our shower did not drain so we had to mop the floor after each shower - it was not fixed for more nearly two days. I now know that you are paying for amenities like tennis courts, kids clubs, watersport facilities etc - all of which cost on top of the apartments rental. The nightly 'entertainment' was free but very intrusive and loud, especially when the singing was not particularly good.
We were offered a 'special deal' on car hire by a member of reception staff, which we were able to secure in Porec for two thirds of the cost. This reflects what we felt was an over-priced holiday experience.

We rented an apartment for 6 people. We 2 story apartment with 3 bedrooms, 3 balconies, 2 bathrooms and a dining room with kitchen. The place was a few meters away from the beach. Free parking is also practically in front of the apartment building. All the rooms were big and well furnished.
The kitchen... has enough pots, glasses and plates for 6 people. There is an electric stove, small fridge, water heater and a microwave.
We only missed kitchen towels and electric socket on the balcony.
The resort includes a few restaurants, bars, bakery, small shops and even a disco. So you practically do not have to life the resort the whole time you are there.
The staff was really nice. Since our apartment was cleaned earlier they let us check in early which is really an exception in Croatia.
The beach was OK, especially in September where there were not so many people.